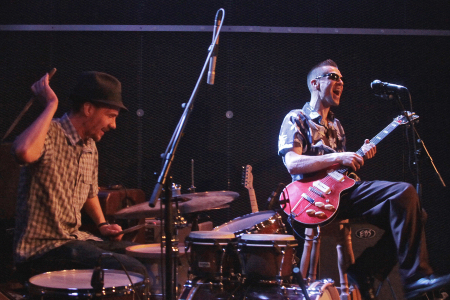 “One of the best examples of various American Musics combined perfectly in a far way continent is Finland’s Jo’ Buddy who has recorded 14 or so albums under various names, his latest being Rhythm ‘N’ Roll Rumble by Jo’ Buddy’s Trio Riot. On 13 originals, he displays, an affinity for blues and old-time rock & roll matches only by his authentic tones and licks on guitar.”
Dan Forte, VINTAGE GUITAR MAGAZINE, 1/2020

“Raw, wild and atonal the selection here is somewhat reminiscent of 50’s rock & r&b,
but it retains that magic sound of Jo’ Buddy playing with an oven mit on.”
Charlie Lange, BLUEBEAT MUSIC, USA

“There’s a swampy element to much of the music here and the production is often equally raw.
This cd is certainly worth of listen, and full of pretty exciting stuff.”
Norman Darwen, Blues & Rhythm Magazine, June 2019, UK

“Your new CD is as cool as a polar bear eating ice cream in a blizzard. I dig the Trio Riot sound!”
Jeff Scott Fleenor, USA

“This swings well all the way through, deliciously varied, too”
Bjorn Wiksaas, BLUES NEWS, NORWAY

“His latest effort emphasizes the rock and roll end of the blues spectrum, offering a solid set of original tunes. Turn up your hi-fi, push back the furniture, and have a party!”
Tom Hyslop, USA

“Your last CD is fantastic, lots of comments on my radio show about your sound.”
Ilkka Tarjavaara, CROSSROADS SHOW – VOX FM RADIO, AUSTRALIA

“It’s fantastic & I think you out did yourself on this one.”
Junior Watson, USA

“Love the new CD! It’s rocking & greasy, and dripping with all the stuff I dig.”
Rick Holmstrom, USA

“Check out my friend Jo’ Buddy’s great new CD. Real and wild original R&B and Rock & Roll from Finland! I love every track here. Lo-Fi lo-tuned guitar simple lyrics and grooves that echo the wildest of original rock and roll from N.O. and Memphis. Love me some Jo’ Buddy!”
Duke Robillard, USA

“In Spite of the variety of the material the whole album hangs together very well as a single piece of work.”
Russ Cottee, BLUES IN BRITAIN MAGAZINE, UK

“One of the best guitar players in the World today.”
JUNIOR WATSON, Los Angeles, Ca. USA (2002)

“Man! You’re untouchable & totally unique in this scene today, just like John Lee Hooker & Frankie Lee Sims were back in the days. Nobody can copy you.”
KIM WILSON of The Fabulous Thunderbirds, USA

“His blues is so raw, heartfelt and lowdown the effect is hypnotic, he may be from Finland and sing in English, but Jo’ Buddy’s first language is the Blues.”
DAN FORTE on Vintage Guitar Magazine, USA (2008)

“Very ballsy…primitive and yet with a pocket all his own. Sometimes out of tune, but never out of groove. This guy is definitely an original who can definitely show us a little bit about feel.”
CATHI NORTON, WFHB Music – Bloomington Community Radio, Indiana, USA (2008)

“If you have never heard his playing, think of what an electric guitar would sound like  if it were hooked up to a cement   mixer. That goes close to the raw plank plunking on this cd.”
CHARLIE LANGE, Bluebeat Music, California, USA (2008)

“In your hands deep blues is vital and strong! Congratulations!”
PRZEMEK DRAHEIM DJ of “The Voice of the Blues”-radio show POLAND (2008)

“He’s one of the most independent and creative artists in the Nordic blues scene. There is hardly a genre that he did not cover with his special interpretations in different compositions. Additionally, there are few who sing blues as authentic as him,without letting it get stupid or overshadowed, which differs from anything else given here.”
ANDERS LILLSUNDE, Jeffersom Magazine, SWEDEN # 156 in 2008

“Jo’ Buddy is my favorite guitarist today. He comes from Finland, but could blow your mind.”
JOHNNY MOELLER a recent guitarist of The Fabulous Thunderbirds on Big City Rhythm & Blues Magazine, Detroit, Mi, USA (2010)

“You´re not only a great guitar player you´re a great singer too.”
TAD ROBINSON, Indiana, USA (2000)

“I really like the way you’ve dressed, but that ain’t all,  from the 1st note on your playing brought me a lot of great memories of my father. Thank you very much for keeping this real music alive.”
ZAKIYA HOOKER, John Lee Hooker’s daughter, USA (2010)

“Jo’ Buddy’s style drinks from the roots, but has a strange and strong personality mainly shaped by the tone of his guitar,  strange and evocative while perfectly executed. A different disk, of which distinguish the brave from cowards.”
ROCKERS.ES (2008)

“Love Jo’ Buddy. His sound and mix of Southern roots styles with other things plus a Finnish twist make him irresistible to my ears.”
DUKE ROBILLARD, USA (2015)

“I met Jo’ Buddy many years ago. He was mighty cool then and is still way too cool. I recommend everybody always buy his releases.”
JAMES HARMAN, USA (2015)

“I saw this Finnish duo and was really impressed. Singer/guitarist Jo’ Buddy has a great feel and knowledge of the music. With Down Home King III on drums it was a great combination.”
BIG JOE LOUIS, Blues Matters Magazine, U.K. (2007)

“Not to mention the general unsavory bar vibe that means you’ll listen to this album while half-expecting a redneck to break a bottle over your head.”
8/10 CLASSIC ROCK MAGAZINE, U.K. (2008)

“This music is raw and hypnotic and probably different from most blues you’ve heard before. Combining all of this into one cohesive unit could have been a disaster in the wrong hands, but fortunately, the duo is able to pull it off effectively, making Whole Lotta Things To Do a successful endeavor.”
GRAHAM CLARKE, Blues Bytes, USA (2008)

“Listen to the full sound of the lively, raw, swamp infused Blues produced by just two guys, and I’m sure you will have a great big smile on your face feeling that you have just discovered a New Orleans gem. The truth is they are from Finland.”
THOMAS RANKIN, Blues Matters! Magazine #48, U.K. (2009)

“Jo’ Buddy and Down Home King III are still creating the best blues music this side of Como Mississippi.”
RED LICK RECORDS, U.K. (2010)

“Man, I really loved seeing you guys play and you got your own sound.”
LOUISIANA RED (2010)

“Nowdays, I don’t hear a band like Groovy Eyes anywhere in the World. You guys in Finland are crazy!”
KIM WILSON of The Fabulous Thunderbirds, USA (2003)

“You can’t find a better band from California or even from the whole United States!”
JUNIOR WATSON, Los Angeles, California, USA (2001)

“What the hell´s going on in Finland?  It seems like every act I hear from there is amazing and now the jump-blues & swing of Tampere, Finland´s Groovy Eyes.”
DAN FORTE, Vintage Guitar Magazine, USA (2001)

“I sure think that Charlie Christian is watching Groovy Eyes from above and is pleased.”
DJ KAI “DR. MAD K.” BECKER (Blues Radio Germany) GERMANY (2003)